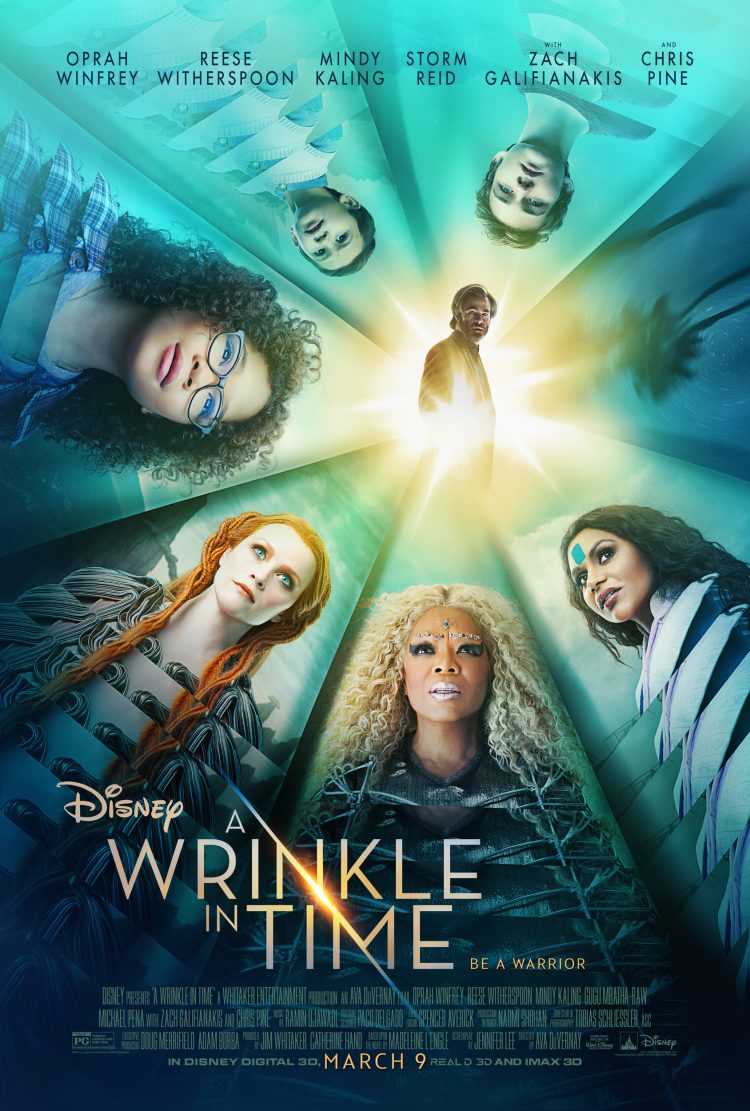 From visionary director Ava DuVernay comes Disney’s “A Wrinkle in Time,” an epic adventure based on Madeleine L’Engle’s timeless classic that takes audiences across dimensions of time and space, examining the nature of darkness versus light, good versus evil and, ultimately, the triumph of love. Through one girl’s transformative journey led by three celestial guides, we discover that strength comes from embracing one’s individuality and that the best way to triumph over fear is to travel by one’s own light. Before I get into my thoughts on the movie, here is a little more information on it.

Meg Murry is a typical middle school student struggling with issues of self-worth who just wants to fit in. The daughter of two world-renowned physicists, she is intelligent and uniquely gifted, as is her younger brother, Charles Wallace, but Meg has yet to realize it for herself. Complicating matters is the mysterious disappearance of her father four years ago, which has left Meg devastated and her mother heartbroken, and while friends and faculty at school urge her to move on, Meg knows he is still alive. Before he vanished, Mr. Murry was tracking events in the cosmos when he discovered tessering, a wrinkling of time and space through which intergalactic travel is possible, but it is still an unproven theory, and one the scientific community regards with much skepticism.

One night, Charles Wallace, Meg and a fellow classmate, Calvin, meet three otherworldly visitors who have traveled to Earth with an important message for Meg: Her father’s discovery is, in fact, an extraordinary accomplishment, but a darkness has infiltrated the universe and he is now in grave danger. Together they set off in search of Mr. Murry with Mrs. Which, Mrs. Who and Mrs. Whatsit as their guides, tessering to worlds beyond their imagination and confronting the powerful, evil energy face-to-face. But in order to save her father, Meg must first overcome her own flaws and insecurities and harness the strength necessary to defeat the darkness…and it is a journey she must come to on her own. Last night we had the opportunity to see a screener of A Wrinkle in Time, as always I take my girls with because children are often the best critics and I think they can see things that adults don’t sometimes.  The movie started off magical and fun but then somewhere in-between we got a little confused.  All of us. We haven’t read Madeleine L’Engle’s young adult novel “A Wrinkle in Time” yet, but now I am wanting to so I can see how the author of the book told this story.

The film started out beautifully but about halfway through it started to go off track and felt strange and had no flow.  I started to get antsy in it and my girls were more worried about going to get treats than watch the show. I did however like the character Mrs. Who. Comedienne-actor-writer Mindy Kaling (“The Office,” “The Mindy Project,” “Inside Out”) plays the third astral guide, Mrs. Who, a character who represents a melting pot of the world we live in, both historically and in today’s modern times. The quietest of the group, Mrs. Who has adopted the language of some of the greatest spiritual warriors as a means of communication, speaking in proverbs and quotes from the likes of Shakespeare, Churchill and Buddha.

“Mrs. Who has evolved so much that she doesn’t quite understand why we need language,” explains screenwriter Lee, “so in order to communicate she doesn’t bother to think up things herself, she just steals words from everyone else.’

It kinda bums me out because I was totally cheering on my favorite Oprah!

Don’t get me wrong, we didn’t hate it.  The actors were good, especially the child actors.  They were fun and witty and full of emotion.

Meg. Charles Wallace and Calvin were stars. I just wish the rest of the movie was a good as they were.

If you go and see it, let me know your thoughts.

Visit the official A WRINKLE IN TIME website here

A WRINKLE IN TIME opens in theatres everywhere this Friday March 9th!