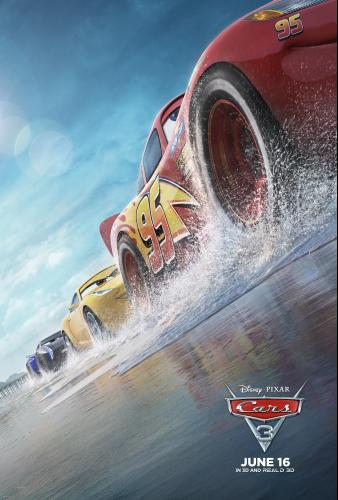 We had the opportunity to watch Cars 3 last night and had an amazing time. Cars 3 is definitely one you want to see on the big screen with your favorite drink and big bucket of popcorn. Lightning McQueen raced into moviegoers’ hearts more than 10 years ago and remains an iconic character today. It was that 10-year period that inspired filmmakers to explore what’s next for #95.

Lightning McQueen is back on the big screen, but he’s not a rookie anymore. Blindsided by a new generation of blazing-fast racers, the legendary Piston-Cup champion finds himself suddenly pushed out of the sport he loves. “The next-gen racers are cool,” says director Brian Fee. “You can see instantly that cars like Jackson Storm are effortlessly fast. We designed these younger, faster cars to be sleek and aerodynamic—and they’re a sharp contrast to Lightning McQueen.”

Producer Kevin Reher says the story is reflec ve of real-life champions. “Lightning McQueen has been racing for more than a decade,” says Reher. “He’s struggling with the kind of issues a lot of athletes face later in their careers. Do you go out on top or fight ll the end?”

I was extremely happy with Cars 3 and the entire story line, for some reason Cars 2 was not my favorite. “‘Cars 2’ was a spy caper that was fun and exciting, but it was really more Mater’s story. In ‘Cars 3, the producers wanted to get back to Lightning McQueen and the warmth and depth that resonated with so many people in the first film. And it is exactly what they did.

We laughed and cheered the entire film.  The graphics, music and effects were top notch.  We were able to watch it in 3D and it was amazing!  Disney has done it once again.  You will leave Cars 3 feeling uplifted and fulfilled.  It is a must see this weekend.