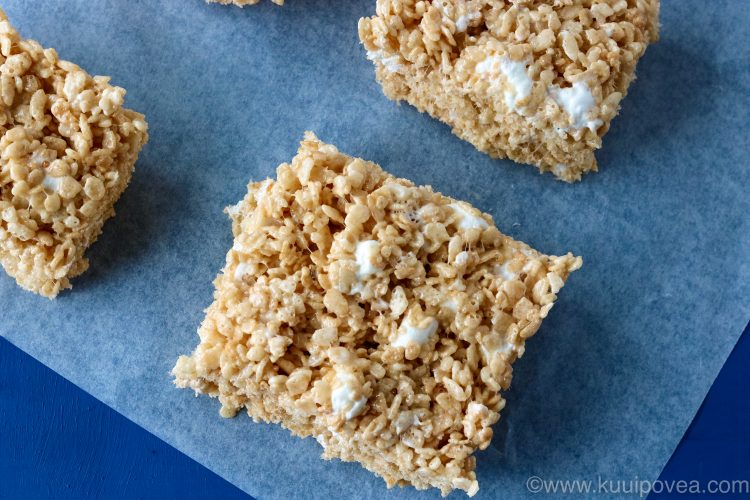 We have been on a rice krispy treats kick for a week or so.  But first, a little back story . . .  I wanted to try to re-create the rice krispy treats we got at Disneyworld.  My husband bought a package of them while we were there and I immediately thought “yuck” when I saw them.  They looked stale, hard, and not a treat I wanted to eat. . . but I did.  And they were delicious. So last year my girls and I got to work and came up with this recipe.

We made over 15 batches of them a couple of weeks ago for Valentine’s Day because my girls had a bake sale and sold a million them and ever since then we have made them eight more times. I know, it’s a little ridiculous, but they are so, so good! Look at all of those gooey marshmallows! This recipe is super easy but a little different from the recipe on the box.

Remove from heat and stir in vanilla and salt (the salt is optional, but I think that little kick of salty goodness is just what these need). Gently fold in the remaining marshmallows and the rice krispie cereal until mixed well.  Pour mixture into your sprayed pan and spread evenly.  You will see that the treats need to be pressed down a little bit to even them up in the pan and to pack them a little tighter.  I like to spray my hands a little with the cooking spray and press down on the treats just a little bit to pack them in.  Don’t push too much and smash them otherwise they will be too tightly packed.  I think they are too hard to chew when they are packed too tight, you want to keep them airy.

Let them cool for a little bit before you cut into them. See how easy that is?  A delicious, easy treat.  I promise you won’t be able to eat just one. Be sure to pin this recipe for later.  You won’t want to forget it!